The Something Weird This Ways Comes Podcast is LIVE!

Hosts Moe and Roo discuss the best in wild campy exploitation films from the 30's - the 70's. Though episode 1 isn't a something weird film, most episodes will be

To make people's life easier, you can listen to the new episodes of all my podcasts here

Here's Something Weird, Dead End Drive-In and No Budget Nightmares

and here's Drunk on VHS

The Bloody Pit of Horror 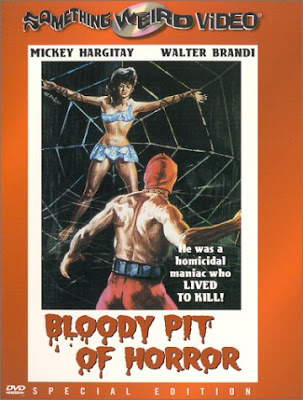 Former Muscleman and Jayne Mansfield’s husband at the time, Mickey Hargitay stars as the crimson executioner. A group of models travel to a castle with a photographer to shoot some pseudo-torture shots for a novel a writer is working on. Inside though they discover much more than they had bargained for when mysteriously one by one each member of the crew begins to disappear and is found dead by various means. Turns out the master of the house dislikes company and fancies himself the resurrected “crimson executioner”. 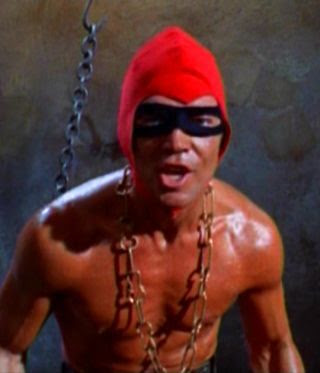 Soon he’s captured the rest of the crew and is torturing each of them to purify their souls. It’s up to the intrepid author to save as many of the remaining crew as he can (and trust me, it ain’t much). This Italian horror is full of diabolic torture devices and demented ramblings of an outlandish madman. Bloody Pit of Horror is an all around good time and one of the best from the golden age of Italian horror. 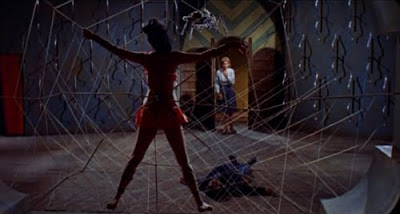 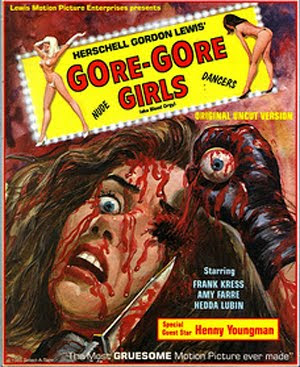 Frank Kress is Abraham Gentry, to date I’m still not entirely sure if he’s supposed to be so brilliant that he’s misunderstood or if he’s just a fucking jerk. My instincts tell me it’s the latter. Though I have to admit he does drive an awesome car. Dingbat reporter Nancy convinced the mad genius to work on a case of murdered strippers and go-go dancers. It seems our murderer has an issue with the adult entertainment.

The murderer dispatches his victims in the most gruesome ways imaginable. The gore in these sequences is some of Lewis’ most imaginative. I love how the film incorporates lewd comedy with the nudie dance scenes and the delightfully violent gore scenes to make one of the sickest sickies out there. Another winner by H.G. Lewis, come for the tits and stay for the gore. Don’t forget to keep your eyes peeled for the “well tenderized rump roast”

Throw Henny Youngman into the mix and you’ve got yourself a fun night full of depravity!

Enjoy it sickos
Posted by Moe at 8:28 AM No comments: 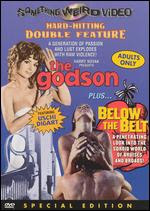 (Not looking at the double feature disc, just Below the Belt. I do own both of these as well)

Below the belt may possibly be the meanest film I’ve ever seen Buckalew Direct. I’ve already written about the Buckalew Classick Sassy Sue and I own several others. Typically they tend to emphasize the fun factor and are very easy on the eye, but below the belt takes it in a very violent direction. Though it’s not surprising that it still winds up being a great film. It’s just a little disconcerting at first when you’re so used to a particular director doing nudie cuties and they take such turn in the roughie direction. It still just proves that Buckalew is a master of their form.

Below the belt stars John Tull (taking a surprising dramatic turn from his usual comedic supporting roles) as Sammy, manager for a small time boxer and all around bad guy. He likes to beat woman and has a serious Napoleonic complex. Johnny is his fighter. Johnny is a real nice guy. He’s a little slow, but strong as an ox. His trainer is Benny who’s played by veteran character actor Buck Flower who will always give a good performance.

Supplying the breasts is a bevy of gorgeous ladies. Rene Bond is a sight to behold, arguably the most attractive woman of the time and easily the most charismatic. Uschi Digart is a double D delight, she’s definitely more enjoyable when you’re seeing her and not hearing her as her accent is borderline painful. Speaking of painful accents our trio of buxom babes is topped off with Mirka who has a lot to offer the screen, just pray she’s not speaking.

One of the few roughies to brave the bold world of color film. Below the belt may not be the best in the market, but it certainly is enjoyable

Enjoy it sickos
Posted by Moe at 11:28 AM No comments:

A Little Something (Weird) for ya...

Found this article on the great Chesty Morgan. A Woman I have personally written songs about. Between Double Agent 73 and Deadly Weapons, her "skills" have been pretty well showcased for the world to see. Well for all of you out there that may have wondered where she is now. I give you this 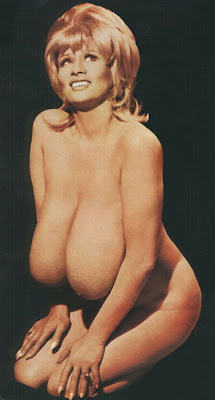 Enjoy it sickos!
Posted by Moe at 8:12 AM No comments:

Mantis in Lace (aka Lila) 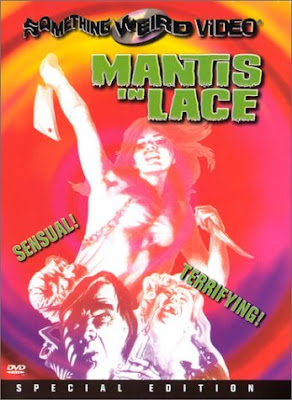 Oh the Ghoulie, degenerate cousin to the roughie. Where in the roughie, sex leads to violence. In the ghoulie sex leads to death, bloody, bloody gruesome death. And in mantis in lace, it delivers in spades. Lila is a topless go go dancer. I have no idea how she’s maintained a job except based on her looks because she’s the single worst go go dancer I’ve ever seen ands trust me, I’ve seen plenty. Lila seduces men and brings them back to a warehouse she’s using to bring guys to have sex with. This whole set up goes terribly wrong when she brings a man back who has her drop acid with him. Needless to say she has a bad trip and he ends up in a field chopped to bits like so much unwanted firewood.

Sprinkle in some amazing breasts, a few more murders, a police investigation, Stuart Lancaster from Faster Pussycat! Kill! Kill! And some bizarre psychedelic LSD trips and you’ve got yourself a film for the ages. Mantis in lace is a truly twisted tale of sex drugs and dismemberment. Fun for the whole family.

Enjoy it sickos
Posted by Moe at 11:32 AM No comments: 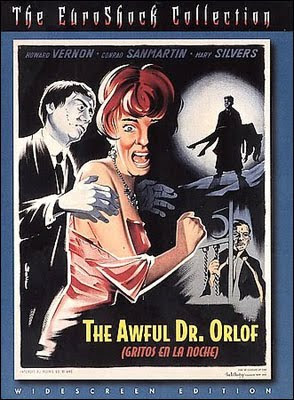 Jesus Franco is something of a madman auteur. Not madman as in insane, but in the fact that he’s so disturbingly prolific it’s a daunting task to even try to name all the films the man has made let alone watch them. The Awful Dr Orlof is one Franco’s earliest masterpieces. It’s the story of the dark and sinister, brooding Dr. Orlof who is on a mission to save his daughter who was burned badly in a fire. To this end he kidnaps women and uses them for skin grafts. He completes his tasks with the help of (the truly disturbing to look at) Morpho. Morpho is blind and once you see the make up they keep him in you’ll wonder as I did if the actor behind it could see anything at all. Not only is it effective as showing his blindness it’s an image that will more than likely haunt you. 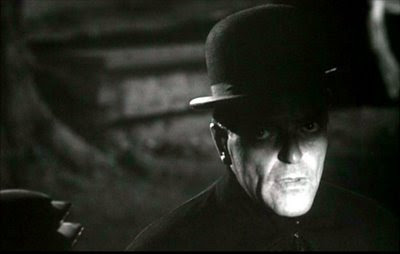 One of my favorite aspects of Orlof has always been the films sarcasm. The dialog for this horror flick is witty and characters seem to have great repartee. In one of my favorite scenes the inspector who’s working the case of the missing girls plays with an interviewee verbally before having him sent to the insane asylum. It’s little additions like that scene that make The Awful Dr Orlof more than just senseless grindhouse fare. Though the modest director would probably deny it if you were to say it to him, but the man is a true artist, an insane artist based on some of his later work, but an artist nevertheless. 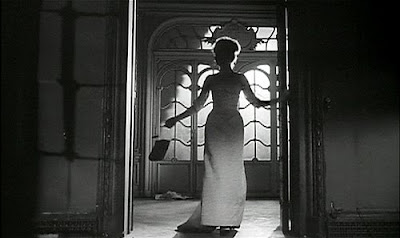 *More Sad news, I was just informed that SWV no longer sells The Awful Dr. Orlof *sniff sniff* I'll do my best in the future to make sure everything I post within the current SWV catalog.
Posted by Moe at 11:24 AM 2 comments: